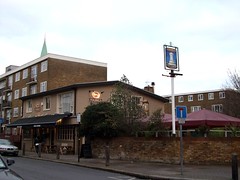 Now closed; was a pub in Battersea. Previously owned by Young's, it was sold to a property company and according to London Drinker as of late 2011 it continued to operate as a pub, free of tie. It closed for a while in May 2012, but reopened again under new management. It finally closed again in January 2013.

The information below (gathered when the pub was still owned by Young's) is retained for historical purposes.

This is a spacious pub, with plenty of tables in several different spaces around a central bar. There is also an extensive beer garden area on two sides of the pub, with a large canopy and patio heaters in the front area, by the (fairly quiet) high street. Inside is an open fire and couches nearby, which gives it a cosy feel in winter.

Kake and Ewan visited on a Thursday evening in December 2008. The four handpulls on the bar offered Young's ordinary (£2.80/pint), Special, and Courage Director's Bitter. They also had Erdinger, Staropramen, and Peroni on draught, among others. Service was very friendly.

ilmari visited several times in 2007, and found the food to be good, with £5 lunch specials, a varied (and varying) menu, a tapas menu, and a Sunday roast. See also photo of menu as of Dec 2008.

Free wireless internet; you get the WEP key from the bar.