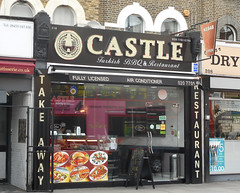 Castle was a Turkish restaurant in Walworth. It has now closed and been replaced by another similar business called Charcoal & Meze.

Turkish restaurant in Walworth. It also does takeaway, but it's more than just a kebab shop. The takeaway section often seems to be open for later than the eat-in part.

secretlondon visited in April 2014. I was interested in their lamb donner as it is actually meat on a stick, not the grim curled minced thing that normally passes for donner. They serve their kebabs with couscous, salad, and a lot of flatbread. I've since had their mixed mezze which was okay, and onion in pomegranate sauce which I'd hoped was going to be like the onion you get at F M Mangal but wasn't.

secretlondon's verdict: I think their kebabs are better than those of Best Kebab but as a restaurant they do not do chips as far as I know, and they do not have the opening hours of the Best Kebab.