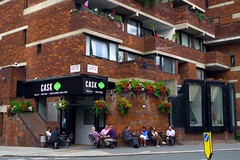 A pub in Pimlico, situated between Victoria and Pimlico stations, offering an abundance of cask ales, keg taps, and exotic bottled beers.

This was once a poky estate pub called the Pimlico Tram; it reopened as Cask in Summer 2009 under new management and following a grand refurbishment. Its success has led the same people to open other pubs elsewhere in London under the Craft Beer Co. brand, including branches in Clerkenwell, in Pentonville, and in Brixton.

Today, the interior walls are a subdued grey, and the banquettes boast the green of Cask's branding. The space is broken up by support pillars, with one half of the pub getting plentiful natural light from ceiling height windows, though a large table near the door gets almost no light by contrast. However, the tables are a comfortable size, and the banquettes for seating around the wall have plenty of cushions. There are also a few seats outside.

The bar has ten handpulls for ale, with a regular presence from Dark Star and Thornbridge breweries along with an ever-changing selection of well-chosen guests. There are huge numbers of ales passing through, so summing them up would be difficult. In May 2010, they had a mini-festival of six Brew Dog cask ales, while on other occasions they've had guest brewers in from around the world (several from Denmark in particular, as well as the USA) showcasing their products. In July 2010, BrewDog Hardcore IPA was £4. On Ewan's July 2012 visit, about five of the handpulls were given over to Hardknott ales. All the ales bob and Ewan have tried have been in excellent condition.

There are also plenty of draught taps for European keg beers, with Moravka, Rothaus Pils and Weisse, Mort Subite Kriek, Brugse Zot Blonde and Bruin, as well as several guests, and Aspall's cider, though again these change regularly, with plenty of guests from Europe and the USA (mostly at around £3.95/half, as these are specially imported just for Cask). However, behind and beside the bar is a huge collection of German and Belgian beers, generally priced around £4-£5 (as of August 2009), as well as a good number from other countries (including the United States) and odd ones like the more alcoholic end of the Brew Dog range. A bottle of Kopparberg pear cider was £4 in August 2009.

On the first Friday evening we visited, the place remained largely empty with only a few small groups of drinkers (aside from our group of 10), ceding later in the evening to some older local residents, though the publican insisted this was the first time they'd not been busy since opening. Music was playing, soft jazz and other bland choices, but the atmosphere was pleasant enough. Another Friday in September 2009 was a little busier, but securing a large table wasn't a problem over the course of the evening, and it remains a good bet for an evening drink.

On bob's Thursday evening visit in July 2010 it was empty at 5pm but very busy by 7pm — there was obviously at least one very large office party in. By 9pm things had got quieter, but there were still only a few spare tables. The beers I tried were all very well kept.

As of May 2013, food is limited to burgers, provided by Forty Burgers. There is one vegetarian option on the menu (halloumi and mushrooms). bob's burger was a tad overcooked; since it was one of the last two available, this suggests they may leave them sitting around.

Ewan's verdict: A great range of well-kept beer and a location not too far from transport links make this a good choice for drinks. The expansion to ten ale handpulls makes this very much a destination pub for ale drinkers.

Accessibility: No step to get in. Ladies' toilets on the same level as the bar and seating, but the gents' toilets are down a very narrow staircase.