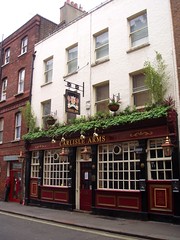 The Carlisle Arms was a traditional boozer in Soho. It has now closed. As of late 2015 the premises are occupied by a branch of Simmons bars.

A solitary outpost of the traditional boozer in Soho.

Perhaps in other parts of London, this pub wouldn't warrant much of a mention, but this being Soho, it makes a refreshing change from the vacuous style pubs and soulless bars that crowd the streets about and attract the media crowd. Even on a busy evening when all other venues were packed, this place still had room for a large group to find a seat without being unpleasant or noisy.

It's a single room affair, with the bar in the middle and a couple of screens showing sports. Filled with the kinds of regulars you get in a locals' pub, and not unfriendly at all.

On a June 2008 visit, ales on handpump were London Pride and Greene King IPA.