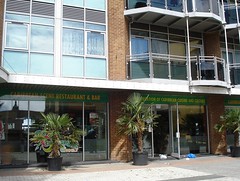 Caribbean Scene Family was a Caribbean restaurant in Stratford. It has now closed. As of February 2014 the premises are vacant photo with a sign in the window photo stating that the lease has been forfeited.

Caribbean restaurant in Stratford, just around the corner from the Stratford Picture House. It also has another branch in the Royal Docks; this one is more family-oriented, as suggested by the name.

Kake, bob, ilmari, and Ryan visited on a Wednesday evening in September 2008. We arrived a little after 9pm, and it was about half to two-thirds full (it's fairly big). It seems to be a fairly informal place; menus are stacked in holders on each table, and waiters crouch down beside your table to take your order.

A first glance at the menu suggested that there weren't all that many choices; but there are actually quite a few, it's just that they're divided into lots of different sections - burgers and roti, chicken, meat, vegetarian, and fish. The vegetarian section has four options, including a vegetable stew originating from Trinidad and Tobago, and stir-fried vegetables with noodles (according to the website, stirfries were introduced to the Caribbean by Chinese labourers in the 19th century). There's also a selection of children's meals.

Main courses are mostly around £6-7, but this doesn't include sides, so you get to mix and match as you prefer. Sides are £2 for a mini portion (e.g. one corn-on-the-cob) and £3.50 for a maxi portion (e.g. two corn-on-the-cobs). If you're on a budget, you can easily stay under a tenner a head unless you're starving. The menu can be viewed on their website (no direct link, but it's in the navigation bar).

Kake had the ackee and saltfish (£6.75) photo with a side of "hard food" - boiled yam, green banana, and a couple of dense chewy dumplings (£3.50, maxi size available only) photo. It was all just fine; I don't know enough about this type of food to know if it was above average, but I was happy with it.

ilmari had the jerk chicken (£5.50 for a half-chicken), which comes in your choice from three levels of chilli heat. He chose the middle level, which turned out to be actually reasonably spicy; it wasn't just heat though, there was a decent amount of chilli flavour too.

Service was friendly enough. Our side dishes somehow got lost from our original order, but another staff member came over to check with us because she thought it was odd that we didn't seem to have ordered any, so it all worked out fine in the end. They had no problem bringing us tapwater.

They have live music on every Wednesday (according to a sign seen in September 2008); on the evening of our visit this comprised a singer plus a keyboardist/backing singer. It wasn't overly obtrusive.

According to their website, bookings are recommended for large groups at the weekend.

Accessibility: I'm fairly sure there was no step to get in, but navigating a wheelchair between the tables might be slightly tight. There's definitely an accessible toilet (combined with baby-changing facilities).

Comment added by secretlondon: This had a sign outside advertising an all-you-can-eat buffet. I didn't investigate further though.