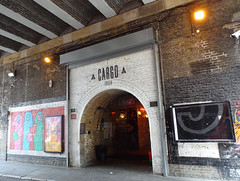 Cargo was a bar and club in Shoreditch. In late 2021, the owner announced that it had closed for good.

A bar and club space with kitchen, nestled in railway arches just off Shoreditch High Street, which also puts on gigs in its back room.

A set of glass doors lead into the murky darkness of the interior, with its vaulted brick ceilings. There's a seating space to the side near the kitchen, and a longer bar area up some steps at the back. The club/gig area is to the rear of the venue and is kept curtained off when not in use, but has a stage area to the left and a bar to the right, at the back.

There's an extensive beer garden at the side of the venue, which can be accessed directly from the street until they close the gates in the evening, including some large tables, some under cover.

The only draught beer available at the bar (and then only at the bar under the arches at the back) is Amstel, for £3.40/pint (£4 after 11pm), though they have a range of bottled beers and ciders also available. There's also a decent house wine, not too expensive.

The food menu is fairly reasonable, and includes some bar snacks. Ewan's group had some flatbreads with dips (hummous and an aubergine dip, £3.75), as well as some crispy, slightly greasy, fries which were fine (£2.75), and a mixed platter (£17.50) of meatballs, sausages, calamari, chicken skewers and stuffed vine leaves. They do £5 lunch specials according to their website.

There's a Photoautomat photo machine at the back of the beer garden which can seat a couple of people and takes four different photos (£3 a go).

Comment added by James: This summer, they were advertising their BBQ which smelled rather nice from their beer garden. This might perhaps offer an alternative to the other food options which can be rather limited.