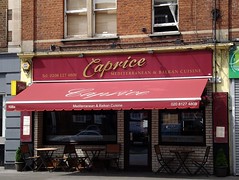 Caprice was a Balkan and Mediterranean restaurant on the High Street in Croydon. It closed down some time between October 2017 and June 2018. As of June 2018 the premises are occupied by a Bulgarian restaurant called Vitosha photo.

Balkan and Mediterranean restaurant on the High Street in Croydon.

It seats around 40-50 people, with a combination of banquettes around the walls and a few freestanding tables. The effect is quite cosy.

Kake and Kat visited on a Monday evening in December 2012. We hadn't booked, but the place was almost empty so this wasn't a problem — there were only two other people in when we arrived a little after 8pm, and they left shortly after. Music was playing, not too loud. A TV was showing what appeared to be a Bulgarian channel, with the sound off.

A small basket of bread was brought as we sat down, along with oil/vinegar and a dish of green olives; no charge for this appeared on the bill. Tap water arrived swiftly upon request.

We began with a shared starter of krustini with marinated herring (£9) photo. The herrings had a good texture and a piquant but not overwhelmingly vinegary flavour; the accompanying gherkins were firm in texture and again not overly harsh in flavour. The krustini were only very lightly toasted (normally they should be much more rusk/biscuit like) but still provided a sturdy enough substrate for the herrings.

Kake's main course of tongue and tripe specialitet (£13) photo was quite cheese-dominated, though this was clear from the menu so this isn't a complaint! The tripe was well-cleaned and well-cooked, and made a good textural contrast to the tongue and mushrooms. I'd order this again, though I might ask them to go light on the cheese. Kat had the kebap Balkan style (£14 on the menu, £13 on the bill) photo. The pork pieces had a pleasant smoky flavour, and the onions and peppers were soft and moreish. Overall the dish was quite oily but that was fine by Kat.

Kake visited again on a Wednesday lunchtime in August 2013. When I arrived around 1pm I was the only customer, and this remained the case throughout my visit. Eastern European pop music was playing.

Bread, olives, and oil were again provided gratis photo; the olives were a little too salty for my taste, but the bread was good, warm and soft, with an ultra-thin crackly crust.

I skipped starters and went for a main of fish miller's style (£11) photo, billed as "oven baked haddock fillet cooked with mushrooms, gherkins, onion, ham, peppers, cream and egg in a clay dish". The cream-based sauce was savoury without being cloying, with bright notes from gherkins and lemon slices. The fish was tender; the ham was tender too, and not too salty. The onions were plentiful but not overwhelming, cooked to a gentle softness. Sadly there were a fair few lemon pips in the mix; but overall this was a lovely comforting dish, not too heavy, and one I'd order again.

Service was fine on both these visits; not chatty at all, but that was fine with us. A 10% service charge was automatically added to the bill.

On another visit in June 2014 as part of the Croydon Seafood Crawl, Kake et al. were particularly impressed with the calamari marinara (£7) photo — nicely tender squid with slightly charred onions, fresh tomatoes, olives, raisins, and pine nuts. The seared king scallops in saffron cream sauce (£8 for three large scallops) were also good, with very well-judged timing on the scallop cooking. The kitchen were happy to make one order without the cream photo for our dairy-intolerant diner.

Accessibility: A step to get in. Toilets are down a flight of stairs with a handrail on one side; this handrail is quite hard to grip at the top as it's flush with the wall.