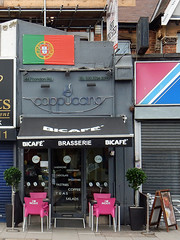 It's quite small, being half of a subdivided shop unit, and seats just 30 people inside and another four outside on the pavement. Entry is into a narrow space photo which opens up further back photo. Decor is fairly smart, in greys, browns, and creams, with art prints on the walls. Shelves and a sideboard hold Portuguese groceries for sale, including breakfast cereals, juices, pasta, soup mixes, oil, wine, and even a few household cleaning products.

Most of the menu is British cafe food including fried breakfasts, sandwiches, omelettes, jacket potatoes, and hot dishes like scampi and chips, lasagne, and spaghetti bolognese. However, they also do a few Portuguese dishes such as grilled sardines and steak and eggs. They are licensed to serve alcohol.

We've visited twice now, most recently in June 2018. On bob's Monday lunchtime visit in August 2016, there was one customer sitting outside when I arrived shortly before noon, and two more groups arrived while I was there. When Kake visited in June 2018, there were three other customers a little after 9am, and several others were in and out while I was there, many seeming to be regulars. On this latter visit, no music was playing but the flatscreen was showing Portuguese daytime TV with the sound on.

In August 2016, bob ordered the builder's breakfast (£9) but was actually brought the traditional English breakfast (£7) photo, though they did at least charge me the right price for what I got. (When I queried what they'd brought, they just said something about having run out of black pudding.)

The hash browns were a touch oily, as if the oil wasn't hot enough. The fried egg was cooked perfectly, though. The mushrooms were pretty good. The beans weren't swimming in sauce, which I appreciated. The grilled tomato wasn't grilled quite enough. The sausage was disappointing, but the bacon was OK. Pineapple smoothie (£3.25) photo was quite nice, with a lot of pineapple in it.

In June 2018, Kake's eggs royale (£8) photo weren't bad, with plenty of smoked salmon and nice runny yolks on the eggs. The hollandaise was unfortunately rather too sweet for my taste. This was served on a thin slice of robustly-toasted bread rather than the usual English muffins, which worked well enough but made me wish for a sharper knife. Service was a little slow because they were quite busy, but they did apologise for this.

They have free WiFi with no password, and they were happy for Kake to sit and work on a laptop for a couple of hours. One of the tables is close to a plug socket.

Accessibility: A short but steep ramp to get in. Most of the interior seating is down a step at the back photo, and the toilet is accessed from here too.