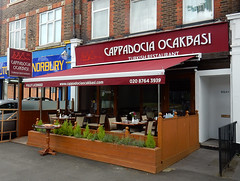 It seats around 45 people inside, and has covered outdoor seating for another ten out the front.

bob visited on a Thursday evening in July 2016, shortly after a change to new management. When I arrived around 6pm there was a large group occupying the seating outside, and two customers inside; three more groups came in during my visit.

Once I'd ordered, a very puffed-up freshly-cooked pitta photo was brought to my table, along with olives, salad, olive oil, and what I think was garlic butter photo. The salad was fresh, and dressed with a sweet dressing. No charge was made for any of this.

I started with lahmacun (£2) photo and hummus kavurma (hummus with diced lamb; £5.50) photo. The lahmacun was good, and well-sized (I hate to think how big the main-course portion would be); the accompanying tomatoes, onion, and parsley were fresh. The hummus was served warm, with tender and well-spiced lamb.

Mixed kebab (£14.90) photo was accompanied by a different type of bread, fluffy and white photo. It also came with a small mound of bulgar wheat, which was fine, and a chilli sauce photo, which included tomatoes and had a peppery flavour.

The chicken and lamb shish were both tender and juicy, with a nice bit of char, and extra flavour came from the chilli oil used to baste the lamb. The lamb cutlet was crusted with pepper, and also juicy, with a touch of pinkness inside.

Two minced items were included: izgara kofte, a sort of burger made from lamb and beef; and adana kebab, a spiced cylinder of minced lamb moulded around a skewer for cooking. The izgara kofte was OK; the meat was minced very finely. The adana kebab had enough spice.

Baklava to finish (£4) photo was served with ice cream, and was OK.

No service charge was added to the bill.

Accessibility: A ramp to get in, and the entrance is fairly wide but has a 90-degree turn just inside. Another ramp down to the toilets, but the doors are probably too narrow to get a wheelchair through.