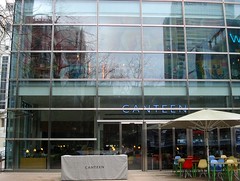 This was the Canary Wharf branch of Canteen, a small chain of restaurants offering traditional British food. It closed down in 2016 and was replaced by a branch of Shake Shack.

The Canary Wharf branch of Canteen, a small chain of restaurants offering traditional British food. This one opened in November 2009.

elvum and friend visited for breakfast on the Saturday of a bank holiday weekend in April 2011, and found it almost empty. Between us, we had eggs benedict (£8.50) and bacon, fried eggs, and bubble & squeak (£7.50). Both were very good. Service was a little slow despite the lack of customers. Our bill included an optional 12.5% service charge.

According to the menu, all the eggs Canteen use are organic and free range, and all their meat is also free range.