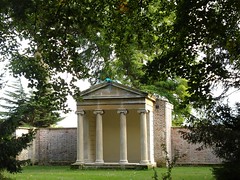 Reasonably-sized park in North London, in the London Borough of Harrow.

Prior to its incarnation as a public park, perhaps the most significant owner of the land it lies on was James Brydges, the first Duke of Chandos, who developed it into a grand country estate in the early 18th century (see Locale Canons Park for more information). The King George V Memorial Garden, a formal walled garden which lies within the park, was created in the 1930s by Harrow Council on the site of the Duke's old kitchen gardens.

Today, as well as the walled garden, the park is comprised of trees, pathways, well-maintained lawns, and a number of listed buildings including a temple folly (pictured) which dates from the early 1800s.