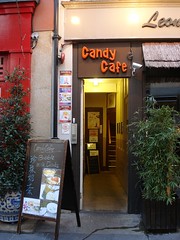 The decor is bright and clean, with much of the seating at tall tables surrounded by swivelling bucket seats, though they do have three low booths by the window, each seating four or so people. (The place probably seats around 25–30 people in total, depending on how willing they are to squeeze in.) Two flatscreen consoles in a corner offer internet access. It's full table service — order and pay at your table — though they also do takeaway from the service counter.

As befits the location, this is no bog-standard British greasy spoon cafe. Their coffees include Ipoh-style white coffee (a Malaysian coffee drink made with condensed milk) and "black black", described on the menu as "coffee shave ice with grass jelly" menu photo. Tea is not builders' tea, but bubble tea — a sweet, milky tea-based drink with tapioca pearls. They also do various soya milk drinks.

The food focus is on desserts and sweet snacks such as Malaysian/Singaporean kaya toast (kaya being a kind of coconut egg jam). They do a few savoury snacks too, though the presence of Nissin instant noodles on the savoury menu menu photo suggests that these may be more perfunctory than profound.

Kake visited on a Tuesday afternoon in June 2010. There were about a dozen customers already in. Music (some kind of chart show) was playing, though not annoyingly loud. I had the house special red bean iced drink (椰汁紅豆冰/yé zhī hóng dòu bīng; around £3.40, I think), which was more of a dessert than a drink, based on shaved ice and more easily eaten with the plastic spoon provided than sipped through the wide straw. It was sweet but not too sweet, and included plenty of nicely-cooked red beans (neither undercooked nor chalky, and with a pleasantly sweet but not sickly flavour).

Accessibility: The cafe is up two flights of stairs (with handrail) from street level. Much of the seating is in the bucket seats mentioned above, which looked a little too high for Kake (5 foot 3) to be comfortable trying to get into.