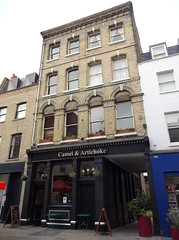 It closed for redevelopment in late 2016, and reopened under new management by May 2017. While the pub had previously occupied both the ground and first floor, following this redevelopment it now only occupies the ground floor. (See older version of this page for a pre-redevelopment description.)

It's a long, narrow room, stretching back from a modest street frontage, and made even narrower in the middle part by the bar that runs along one wall. Most of the seating is on high stools, but there's also a couple of padded sofas as well as three small normal-height tables opposite the bar. There's a beer garden out the back.

Original art hangs on the walls, with price tags indicating it's all for sale; on our visit, this was by Marc Craig, well known locally for his murals in the Leake Street tunnel. Another point of interest is the diamond-shaped wooden panels on the bar, subtly reverse-embossed with alternating camels and artichokes.

Kake visited on a Wednesday lunchtime in November 2017. I was the first customer when I arrived at their opening time of noon, but two others arrived shortly afterwards. Music was playing (Absolute Radio), not too loud.

Two of the three handpumps were on, clipped for Marstons EPA and Wychwood Hobgoblin. A pint of lime and soda was a rather steep £2.40; this was probably partly because the soda was from a litre bottle rather than a gun, but it would have been nice to have some warning.

The pub has no kitchen, due to the loss of the first floor, but as of November 2017 they're happy for people to bring in food from the market stalls on Lower Marsh.

Accessibility: A small step to get in, and another larger one to get to the bar. No further steps to ladies but door very heavy. Three or four more steps to garden.