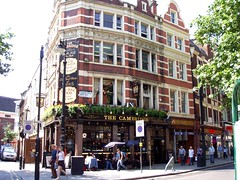 Given its location in the heart of the touristy West End (and very near to several large theatres), this is a particularly small pub, with just six small tables (and one slightly larger) with red leather banquettes along the front wall under the windows. There are three more high tables with stools in the middle of the room, and a couple more stools at the side, but at busy times of day this is likely to get packed very quickly. The ground floor also features some interesting tiling on the ceiling.

Upstairs is a dining room called the "Four Seasons", only slightly smaller than the downstairs room (and with its own smaller bar). However, this is clearly set out for dining and a sign warns drinkers that the room is only for those eating.

When Ewan and Kake visited on a Monday early afternoon in September 2011, there were about half a dozen other people in, some eating a late lunch, others just drinking. Music was playing quietly, punctuated by sirens from the busy roads just outside.

The main ground-floor bar has seven handpulls for ale. The three regulars are Doom Bar, London Pride and Tribute, leaving room for four guests. On our September 2011 visit, the guests were Thornbridge Jaipur, Leeds Monsoon, Moor Black Illusion IPA, and one other which wasn't on yet (a sign behind the bar lists the upcoming guest ales). Two half-pints of the Moor guest ale came to £3.70, and were well-kept. There were also some interesting keg beers, including Suffolk Blonde, Kozel, Aspall cider and others.

According to the Nicholson's website as of September 2011, food is served 10am-10pm Mon-Sun.

Accessibility: No step to get in, just a small ridge. Toilets are up a flight of stairs with a handrail all the way up on one side and most of the way up on the other. Both the ladies' and the gents' are quite cramped.