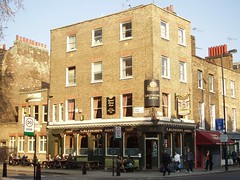 Decent Young's pub in Bloomsbury, with a bookable upstairs area, untouched by the gastro rebranding a lot of Young's pubs have gone through in recent years. As such, it's a regular entry in the Good Beer Guide.

(Note: According to Boak & Bailey, the dreaded Young's refurbishment has finally made it to the Calthorpe.)

This is a real locals' pub, and although it's not particularly close to any Tube station (Russell Square is closest), this does mean that it has the advantage of never being particularly crowded. Inside it is carpeted, with tables around the edge of the long, thin space. It has a few benches and tables outside for al fresco drinking in the warm weather; they're around the corner from Gray's Inn Road itself, so don't suffer too much from passing traffic.

There are six handpulls for ale, which on a November 2009 visit were dispensing Young's ordinary (on two), Special (on two), Winter Warmer, and Tribute. In April 2014, the ordinary and Special were still there along with Young's Blonde and a couple of guests (Doom Bar for example).

As of May 2014, food is served noon-2:30pm and 6pm-9:30pm Monday to Saturday, and noon-2:30pm Sunday. In November 2009, the cheese and bacon burger (around £8) was particularly good in Ewan's opinion, juicy and tender and served in a soft white bun, with chips and coleslaw on the side. As of 2014, the menus are looking more professional but the food offering remains solidly traditional pub grub.

The toilets leave something to be desired; they've had problems with the drains for years, though it has got better recently.

Kake's verdict: I've never been particularly impressed by the food, but it does the job of soaking up the beer. This is also one of the very few pubs in London where another (male) patron has struck up a friendly conversation with me (woman having a drink on her own) in a non-creepy manner. I like it here.