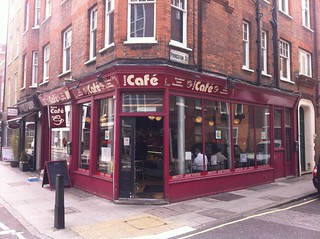 It's quite small, and the lack of space means that while it isn't canteen-like seating all the tables are very close together so it may as well be canteen-like.

bob visited on a Tuesday lunchtime in May 2013 and had no trouble finding a seat. I had set breakfast 6 (£5.90) photo, which included two eggs, bacon, sausage, tomatoes, black pudding, and chips. The bacon was adequately cooked. The black pudding was the earthy tasting type but cooked well. The eggs were slightly runny. The chips were undercooked in my opinion. A bottle of water was £1.

The menu includes four vegetarian set breakfasts, some of which include veggie sausages (the other has a veggie burger). There are also several vegetarian sandwiches and hot meals (including pasta and omelettes).