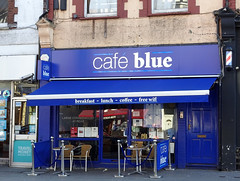 Entry is into a small area dominated by the service counter, with seating provided at five small tables. Further back is the main seating area; a light, airy room with pastel walls, wooden flooring, varnished wooden tables topped with fabric flowers in vases photo, and a large skylight to let the sun in.

We've visited twice now, most recently in June 2018. On a Friday lunchtime in January 2016, there were half a dozen other customers in when Kake arrived around 1:15pm, and it emptied out rapidly after that; the owner did say it'd been very busy earlier though. On a Tuesday lunchtime in June 2018, arriving a little before 1pm, there were around half a dozen customers in throughout our visit.

In January 2016, Kake had the vegetarian breakfast (£5.25) photo and a cup of tea. The tea arrived in an own-branded pale blue cup, along with a tiny saucer for the used teabag — a very sensible touch that most cafes don't bother with.

The breakfast consisted of two eggs, two hash browns, a grilled tomato, baked beans, mushrooms, and a Quorn sausage. I asked for the eggs to be poached, and they were done very well; nice compact shape, runny yolk, and properly set white. The hash browns were slightly undercooked, and not very structurally sound. The tomato tasted slightly fishy, which was a bit confusing since they don't have fresh fish on the menu so cross-contamination on the grill seems unlikely. Toast was seeded and not pre-buttered.

In June 2018, Kake's scrambled eggs with bacon on a muffin (£4.85) photo was a large portion — more than I could finish. The eggs were rather bland, and cooked more than I prefer, though not as dry as cafe scrambled eggs often are. bob's curly fries (£1.75) photo were nice and crispy, but slightly greasier than ideal. bob also had the big blue breakfast (£7.45) with added black pudding (£1.25) photo of both.

Service was welcoming and helpful on both visits. Our orders were taken at the table, and we paid at the till afterwards. No service charge was added, but there was a jar for tips by the till.

They have free WiFi. According to a sign in the window as of January 2016, they have gluten-free cakes, and according to the menu as of June 2018, they can do their sandwiches gluten-free on request (with a small extra charge).

Kake's verdict: A decent enough option if you're in the area.

Child-friendliness: They have toys and games available to use, and at least two highchairs. There's a pull-down nappy change table in the lobby of the toilets, accessible to all genders. They have a children's menu with fairly limited choices.