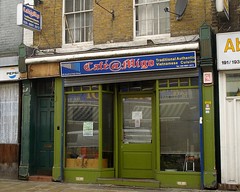 Now closed; was a small Vietnamese restaurant on Deptford High Street. As of January 2014 the premises are occupied by XO Bar photo.

Kake, Sarah, and bob visited on a Saturday evening in March 2010 to try out the hotpot menu photo. Unlike other hotpot places we've been to, the hotpots were priced "all in" rather than offering the option of mix-and-match ingredients, and there was no indication on the menu of how many people each one would be suitable for (our guess having tried it is that each order is enough for two people, which is a little awkward if there's an odd number of you).

Our hotpot choice was the bo nhang dam lau (beef, squid and prawn in vinegar hotpot; £40 all in), which came with lettuce, herbs, vermicelli noodles, and rice paper sheets for wrapping. It was all tasty enough, and the ingredients were good quality, but there just wasn't enough of it to satisfy all three of us. We'd also have appreciated some hot water to top up the stock as it simmered down (we didn't ask, as we weren't sure if it was an option).

Kake's verdict: Not sure. In comparison to the hotpot we had a few weeks later at Royal Palace, the amount of food we got for our money was a bit small. I'd come back to try other dishes on the menu though.

Accessibility: One step up to get in. It's level once you're in, and the ladies' doubles as an accessible toilet.