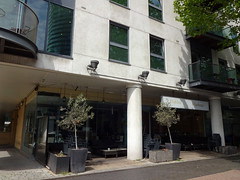 A Lebanese restaurant near Crossharbour Station on the Isle of Dogs.

This is a modern restaurant space at the foot of a large residential block overlooking Millwall Inner Dock, with 10-12 tables dotted around a tiled glass-fronted space. A counter runs along one wall with grills for meat behind it; the rest of the food is delivered up from the kitchen downstairs.

The menu is fairly extensive and has mezza (hot and cold), pastries, soups, salads and grills. The menu is available on their website (they also offer takeaways) photo of menu in June 2009.

On Ewan and Kake's June 2009 visit, we made a selection of five mezza (two cold, two warm, and one pastry). Along with the bread that came automatically (and which Ewan thought was rather dry), this was just the right amount. The hummous beiruty (£4.75) was flavoured with chillies and parsley, tasty but not overpowering. The other cold dish was the moussaka — aubergine cubes with tomato, onion, chickpeas and pepper tapenade (£5) — which was even more successful, with plenty of flavour despite being served cold, and probably the highlight of all the dishes.

Of the hot dishes, the batata harra (£4.50) consisted largely of sauteed potato with a few bits of pepper as well (despite being advertised on the menu as "seasonal root vegetables"), and was fairly bland. However, the foul moudamas (£4), al dente fava beans with garlic and a well-judged citrusy tang, were better; unlike renditions Kake has had elsewhere, none of the beans had overly-tough skins. Photo of the four mezza dishes.

Finally, the rkakat pastries (£4.50) were excellent, filo parcels with feta cheese and another, slightly melty, salty cheese we had to get the waiter to identify (it was identified as akawi) photo.

The wine list has quite a few Lebanese wines on it, and the Ksara Prieuré (£18/bottle) was a perfectly drinkable choice. They were also happy to bring tap water. Service in general was very good, and staff were on hand to answer our questions.

Accessibility: Step-free to get in, and although the toilets (including an accessible one) are in the basement, there's a lift to get down there.