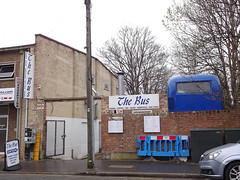 Greasy-spoon cafe in Croydon up towards Selhurst.

Note: This might have closed. Google Street View for October 2020 shows the entrance gate closed with things stacked up against it on the inside.

Note also: The Bus relaunched under new management in September/October 2018, and we haven't visited since, so some of the details below may be out of date.

The main point of interest about this place is its location, in a double-decker bus permanently parked just off a back street near the railway line that runs between Croydon and Selhurst. The view from the upper decks takes in back gardens of houses as well as various car repair places, but the interior is quite nice. Vases of flowers and succulents in pots sit here and there, and the original bus seats have been rearranged to face each other across varnished wood tables. A decking area is just outside, under a canopy with a little shrubbery down the side.

Kake first visited on a Thursday morning in April 2016. There were nine or ten other customers when I arrived a little after 11am, and more turned up while I was there. No music was playing.

I went for the breakfast muffin (£2) photo, which includes your choice of three fillings from bacon, egg, sausage, cheese, and mushrooms; I chose bacon, egg, and mushrooms. The mushrooms appeared to be tinned, and the muffin seemed to have been microwaved so was a bit soggy. The bacon was fine. The egg was cooked hard, which makes sense in a muffin eaten with one's hands. There was a nice little side salad, but no cutlery was provided. Overall, it was fine, and I'd not say no to ordering it again. Tea (£1) came with the teabag still in even though I asked for it very weak.

On a second visit with friends (including two children) in September 2016, there was a large party upstairs so it took a while before we were able to order, but the staff member who came to our table was very apologetic about the wait. A tuna and cheese toasted panini (£5) was generously filled, and the bread was fresh.

Our orders were taken at the table on both occasions, and we paid at the till downstairs afterwards. No service charge was added.

Child-friendliness: There were several children present on both our visits. At the back of the lower deck they have a good selection of toys for children to play with.

Accessibility: A step onto the decking, and more steps into the bus. On our visit, they had one table on the flat ground next to the decking, but this wasn't under cover. The cafe doesn't have its own toilet, but until 5pm customers can use the toilet at a nearby motorbike shop.