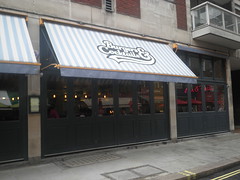 A reasonably-priced burger restaurant in Marylebone, part of the Giraffe chain. According to the website, it rebranded from a standard Giraffe outlet to a 'Burgers And Cocktails' in April 2013. The menu appears to be exactly the same however, with a variety of burgers and barbecued mains priced between £5-£9.

As one of the myriad burger joints in the Marylebone/St Christopher's Place area, Burgers And Cocktails mostly attracts walk-up custom from those unwilling to queue at nearby Meatliquor, Tommi's, or Patty & Bun (which you can see from across the street), or who want to avoid the high density of pushchairs at the other local Giraffe branch (off Marylebone High Street).

On a Friday lunchtime visit in August 2013, most of the tables were occupied but Kat and colleague were seated immediately by the window. Loud indie-rock music was playing, a little too loud to hear normal conversation (the menu suggests earplugs if you are unhappy with this!). Our food arrived promptly and was satisfying for the price: a 'Mac Mountain' (£9) consisted of a patty with two slices of bacon and a deep fried ring of macaroni cheese, which was greatly enjoyed but a little too much food for Kat's (hungover) colleague. Kat's Rodeo burger (£7.40) was more manageable: a patty with bacon, two onion rings and bbq sauce. A large side of fries was £3.10.

Kat's verdict: good value fast food, but almost unpleasantly noisy; this may be because I am Getting Old (indeed, a Wednesday lunchtime visit was much quieter). As burger chains go I think I prefer Byron.

Accessibility: No step to get in. Toilets are down a straight flight of stairs, with a handrail on one side.

Child-friendliness: I didn't see any children on my two visits, but there is a baby changing unit on the wall of the ladies' toilets.