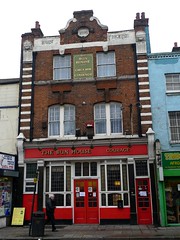 The Bun House was a locals' pub and "art space" on Peckham High Street. It closed in January 2012.

There may not be much to recommend this pub from the exterior (no hanging baskets or flowers, simple signage, slightly shabby brickwork, and windows you can't see through), but once inside it's perfectly pleasant, with very friendly bar service. The pub still retains separate doors for saloon and public bars, but there is no division inside, and patrons can move freely around the central island bar. The carpeted room has space on both sides of the bar for several tables, with an alcove for a larger table.

At the back of the room is a dart board (and blackboards signalling a local arts initiative: in fact, there seems to be an artists' studio just to the rear of the pub), as well as a pool table. A small smoking area can be accessed to the rear also, which has a stepladder up to the roof. A sign warns drinkers that the use of the roof space is at their own peril.

There are at least two TVs inside the pub which, on Ewan's visit on a Tuesday early evening in August 2011, were showing horse racing, and being keenly followed by a couple of locals (though by no means everyone in there, though the pub was fairly quiet). No music is playing.

The bar has several handpulls for ale, but all are off (and show no sign of ever being on, aside from the stray pumpclimp, turned inwards). A standard range of cooking lagers is available on draught. Lime and soda costs £1/pint.

Accessibility: Step-free access to pub and to both sets of toilets. There's a small step to the smoking area out the back.