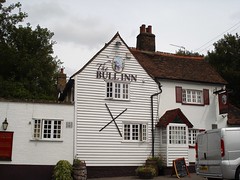 It's an old pub, with a low exposed-beam ceiling. The interior wraps around the bar in a horseshoe shape, and tables and chairs are crammed into the small space. There's a beer garden at the back.

Kake and friends visited on a Saturday lunchtime in August 2013. We'd booked a table in advance, and were seated in one of the "ends" of the horseshoe. There was just about enough space for us all to get in and out when we arrived around 1pm, but when other groups arrived and were seated at the other tables around us, it got a lot more crowded and we had to be quite careful of people trying to get past behind our chairs.

There were three real ales available: London Pride, Shepherd Neame Master Brew, and Timothy Taylor Landlord. A pint of lime and soda was £2.

Food is served lunchtimes at least, from a main menu photo plus daily-changing specials photo. Kake's mushroom stroganoff (£7.25) photo was OK; the mushrooms were nicely cooked, but the sauce was bland, with none of the sour tang I would expect from a proper stroganoff.

Accessibility: Three steps to get in at the main entrance. Only a small step at the side entrance, but there's a step to the toilets from there.