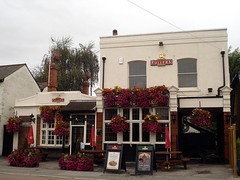 This spacious, open-feeling pub is divided into a number of separate areas inside. On entering, there's a choice of two sides; the one to the right has high tables and chairs, while the one to the left has a comfortable section at the front with varnished floorboards, padded seating and an upright leather armchair by the front window. This latter leads back to a carpeted middle section with a skylight and a little tucked away nook for more private drinking.

Further back is another area with banquettes, exposed ceiling beams, a dartboard (positioned on the door of the accessible toilet), and a door leading out to the garden. The garden itself has plenty of seating, and a covered smoking area; a sign warns that tables and chairs may not be taken into the smoking shelter. There's more outside seating at the front, picnic-bench style.

Kake first visited on a Thursday lunchtime in September 2011. There were only a few other customers, some of them having lunch. Music was playing, not too loud; vocal jazz mainly concentrating on familiar jazz standards. A large and friendly pub dog was wandering around.

On our September 2011 visit there were at least four real ales on, all from Fuller's: Chiswick (£3/pint), HSB, London Pride, and Seafarers. On another visit a month later, either the Chiswick or the Seafarers (can't remember which) had been replaced by Fuller's new seasonal, Front Row. In August 2016 they had London Pride (£3.70/pint), ESB, and Oliver's Island, with Chiswick marked as coming soon. In April 2017 they had London Pride (£3.85/pint) and ESB (£4.10/pint), with Oliver's Island and Seafarers coming soon.

As of May 2017, food is served noon-3pm and 6pm-10pm Mon-Thu, noon-10pm Fri, noon-8pm Sat, and noon-6pm Sun. The menu changes seasonally, around three times a year, and there's also a specials board which changes more frequently.

In September 2011, Kake tried the "oven baked aubergine boat filled with ground steak" from the specials board (£7.50) photo. It was better than average for pub food, with plenty of flavour and a generous portion of meat. Obvious care had been taken with presentation, too. In October 2011, Kake's mozzarella and roasted vegetable panini was again very well presented, with a good mixed salad and home-made coleslaw, along with skin-on chips.

According to the 2012 Good Beer Guide, children are welcome until 8pm, and there's live music once a month. There's a quiz every Tuesday, according to an advert on the pub menu as of September 2011 (on our October 2011 visit, this appeared to start at 9pm).

Accessibility: No step to get in, just a little ridge. Step-free to bar, most if not all of the seating, accessible toilet, and beer garden once you're in. The accessible toilet is located just off the back room, near the garden.