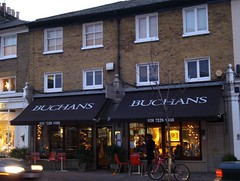 Buchan's was a Scottish restaurant in Battersea, just at the south side of Battersea Bridge. It closed some time in 2010.

Scottish restaurant in Battersea, just at the south side of Battersea Bridge. They do a special Burns Night celebration every year. Kake et al. have only been here on Burns Night, but the food was great in both 2007 and 2008 (if not cheap). They're particularly good at gravies/sauces. Unsurprisingly the menu is heavy on the meat and fish, but they catered very well for Juliet, the vegan in our party, who was definitely the winner in the dessert course. She even got vegan haggis for the haggis course. (We did have to tell them in advance there'd be a vegan coming.)

It's quite “snug” (crowded) inside, and it gets quite warm.

Definitely recommended for Burns Night — there's a piper, and singing! (Songsheets provided for those that don't know the tunes/words.)