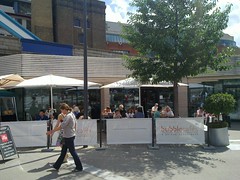 Cafe in Potters Fields Park next to Tower Bridge which is now closed due to a new development.

It is the other side of the park from Amano, SE1 2RL. It looks like this used to be another branch of Amano, and is now run by Bubble who generally run workplace cafes.

secretlondon went here one weekday lunchtime in May 2010. They had a choice of two hot dishes for Â£4 and a choice of 4 salads. I had their offer of a double portion of salad, hummus and flatbread for Â£4.50. They had a notice in the fridge that they did sandwiches but there were none - they may have run out or they may not have made any. Considering how badly it seemed to be run the latter is possible.

Service was really poor. I waited ten minutes for my salad. The only waiting staff asked me if I had been served and when I said that I'd already ordered came back with my food straight away which made me think it was sitting there. They had a frozen yoghurt machine that wasn't working, and a gelato kiosk which was outside, with uncovered gelato but no-one staffing it.

The food was fine but it also took ages to get my bill. When it came I didn't pay the 12.50% service charge which then also took ages as they had to redo it.

It may have been a bad day for them but I not tempted to try it again.

It has outside seating with views of the river and Tower Bridge.

Last visited by secretlondon, May 2010.