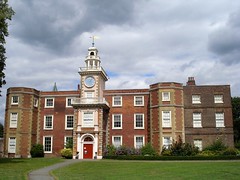 The museum focuses on the past, present, and future of the areas which now lie within the borough, such as Seven Sisters, Tottenham, Wood Green, and Alexandra Palace. There's also a side room covering the history of Britain's postal service; according to Wikipedia, the reason for this is that postal reformer Rowland Hill lived at Bruce Castle in the 1840s. Two galleries on the first floor photo are used for rotating exhibitions showing the work of local artists both past and present.

The centrepiece of the first main room is a restored Comerford speedway bike photo, with an engine manufactured by J A Prestwich Motors of Northumberland Park. Here also is a Victorian grandfather clock photo, given to Tottenham Hotspur football club by a local businessman in the early 1900s and later donated to the museum; its chimes ring out around the museum every quarter of an hour.

Some of the displays deal with the local and national impact of the First and Second World Wars. One exhibit is the remains of a 250kg bomb which was dropped on Wood Green in 1940 but failed to explode; it was handled with a controlled explosion by the bomb disposal unit, and the nose and part of the casing survived. There are also displays showing how everyday life was affected by war, including a collection of replica foodstuffs showing a week's rations photo.

As well as everyday objects, the exhibits include old photographs photo, newspaper advertisements photo, storyboards, and oral histories photo. The manufacturing history of Tottenham and the Lea Valley is emphasised photo.

The second main room of the museum goes back further into history, with a map showing findings of Roman artifacts in the local area and a display of replica Roman pots, with translations of Roman recipes dotted among them photo.

Finally, an "Inventor Centre" room photo offers interactive games and quizzes for children, focusing on "inventions and innovations by local people from the 17th century to recent times". Examples including helping Hugh Myddleton to build the New River by answering quiz questions, and using a television transmission simulator to discover why the local transmitter was sited at Alexandra Palace rather than some other site.

Accessibility: No steps to get in, and there's step-free access to all areas of the ground floor including the toilets. There is a dedicated accessible toilet. A stairlift photo has been installed to give step-free access to the galleries on the first floor.