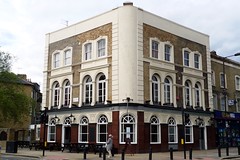 A refurbished Victorian pub, the name shortened in August 2011 from The Brownswood Park Tavern, when it was taken over by the same people who run The Jolly Butchers and The Rose & Crown in Stoke Newington, and The Wrestlers. The Brownswood is located by the north-west corner of Clissold Park, on the borders of Finsbury Park (the area was historically called Brownswood Park, hence the name of the pub).

This is a very large pub, with seating areas on either side of a large central bar photo, itself straddling what would once have been two distinct rooms, and another large room (available for hire) usptairs with lots of light, and an extensive beer garden. Decor is all solidly wooden, with bare wooden floors and clean minimally-decorated walls. A rope runs along the bottom of the bar counter, and some of the walls, a very restrained touch of flair. No music was playing on Ewan's Bank Holiday Monday visit in August 2011.

There are eight handpulls, dispensing two real ciders (Weston's Old Rosie and Thatcher's Heritage), five regular ales (Harvey's Sussex Best, Hopback GFB, St Austell Tribute, Fuller's ESB, and Timothy Taylor's Landlord), and one guest ale (Brodie's Amarilla on Ewan's August 2011 visit) photo. The regular beer and cider offerings are all distinguished by having permanent carved wooden pumpclips, which extends to all the kegged beers as well (including Amstel, Sagres, Staropramen, Guinness, and Addlestone's cider). The only sign of branding is the one guest ale pumpclip, and the two fonts for Hoegaarden and Pilsner Urquell (kept to the edge of the bar area). There are, additionally, three ciders dispensed from taps in wooden cask fronts (presumably facades, given their identical appearance and permanent fixtures) situated behind the bar.

Food is served, which in August 2011 was from a fairly short menu, but including pub favourites such as fish and chips, sausage & mash, and a house burger (each £10), and the customer can specify how the latter is cooked (Kerry asked for rare as possible, and it was indeed faithfully medium-rare). The fish and chips are served with mushy peas, and come out very crispily battered, with equally crispy chips, a fine example of the form. There are also larger dishes, with a vegetarian option (including a vegetarian option for the sausage & mash).

Ewan's verdict: This is a pleasant, spacious, and bright pub, with friendly service. It had only just reopened and still seemed freshly-decorated, so it will be interesting to see how it develops.