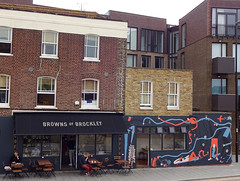 Small cafe and coffee shop opposite Brockley Station. It opened in late 2009 on the site formerly occupied by Dandelion Blue, and has gone through several refurbishments over the years (see older version of this page for a description as of late 2011). In late 2017 it expanded into the equally-small unit next door.

Today, there's seating for 10 or 11 people at regular tables inside, plus several high-ish stools at narrow counters running along the front windows, and a few more tables on the pavement outside. The decor is cream, pastel, and light wood, with mini flower vases on each table echoing larger displays in the corners of the room.

Kake visited on a Tuesday morning in September 2018. There was a small queue when I arrived a little before 12:30pm, but this was quickly dealt with. There were only a few spare seats, and I had to share a table (a notice on the wall encourages this, and also asks people to "be considerate with laptops").

Staff were helpful and attentive — one of them saw me brushing crumbs aside on the table and dashed over with a cloth.

A cheddar, creamed corn, and spinach sandwich on sourdough bread (£4.80) photo was pretty good. The cheddar was flavourful without being overwhelming, the corn was neither too sweet nor too creamy, and the bread was very fresh with a lovely chewy crust. Breakfast tea (£1.50) was fine.

As of September 2018 they don't take cash — it's cards only even for small amounts. They also don't have WiFi.

Accessibility: A step to get in. No further steps to the toilet.