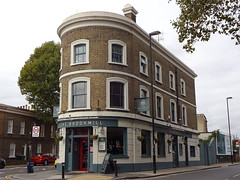 Pub in Deptford. It was previously known as the Cranbrook photo, but had a refurbishment and change of name and management in 2016.

The building is long and narrow, squeezed onto the triangular area where two streets meet at a sharp angle. Inside, a bare-boarded space stretches back past the bar, with seating provided by a mix of wooden banquettes, mismatched wood and enamelled-metal chairs, and high stools. Windows on all sides let in plenty of light. There's also a courtyard-style beer garden out the back.

Kake visited on a Monday lunchtime in October 2018. There was just one other customer when I arrived around 12:45pm. Instrumental jazz was playing, not too loud. Service was welcoming and helpful and helpful.

Three of the five handpumps were clipped, for Waterloo Sunset, Sambrook's Wandle, and Wimbledon Copper Leaf. A pint of lime and soda was £1.20.

Korean fried vegan burger (£12) photo consisted of a battered and deep-fried Quorn fillet in a brioche bun with sriracha, vegan mayonnaise, gherkin, onion, tomato, and lettuce. It was pretty good, with a nice variation of texture and plenty of flavour from the sriracha. The accompanying fries were skin-on, pre-salted, non-greasy, and stayed crisp and hot throughout. A small leaf salad was fresh and varied; my only criticism would be that the dressing wasn't properly emulsified, so the leaves at the bottom had started to wilt.

Accessibility: No steps to get in, but the pavement just outside is rather uneven. No steps to beer garden or to accessible toilet (with pull-down nappy change). Other toilets are on the first floor, up some stairs.