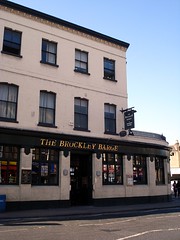 Wetherspoons pub in Brockley. It's similar to most other Wetherspoons; cheap prices, guest ales, food served all day, no piped music (at least not on the Monday evening of our visit). It's not one of the more upmarket examples of the type, but it's not a filthy hellhole either. Some of the tables even had candles in little glasses on them.

Kake, Ewan, and doop visited on a Monday evening around 7pm. It was fairly busy, though not crowded. (This probably means it's rammed nearer to the weekend.) Good buzz of conversation. A scattering of lone drinkers, but they were by no means in the majority.

Service was friendly - when I arrived around 6pm the barman was happy to discuss the beer choices with me (though he handed me over to a regular for the actual discussion) and gave me a taster of the one I was interested in.

Penny Black was £1.89/pint and very nice. The Belgian fruit beer they had on was much less nice - it tasted of Vimto and artificial sweeteners. Black Chalice was also available but went untried.

There's a small beer garden out the back.