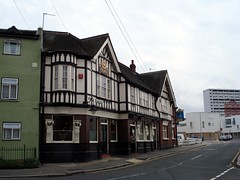 Now closed; was a Young's pub in Barking. It has now been converted to housing photo, though the caryatids remain photo.

Young's pub in Barking, in the Good Beer Guide.

Kake visited on a Thursday afternoon; it was pretty empty apart from a couple of locals. Locals and barmaid alike seemed confused by my presence — I suppose I was pretty weird in context, being a woman on her own drinking in the public bar of an out-of-town pub in the afternoon. Three real ales: Young's Bitter (I think), Young's Special, and Wells Bombardier. The Special was £2.51/pint, and there was nothing wrong with it.

The public bar has a pool table, and a flatscreen TV, which was showing football but not loudly. I didn't go in the saloon bar, but the interweb says it has a piano.

Not sure it's worth a journey, but if you're in the area it's probably worth checking out. Certainly can't argue with the prices.

According to the 2007 Good Beer Guide, food is served lunchtimes except Saturdays.