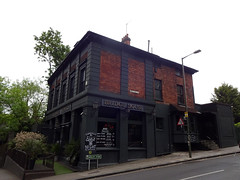 It's situated on the side of a hill, and is on a few levels inside. The lower level has dark-grey walls and seating provided by a mix of mismatched upright wooden chairs and a few low armchairs. Vintage sideboards stand against a couple of the walls, and limited edition art prints (available for sale) hang here and there. This may have once been two smaller rooms, but it's now been partially opened out, with two large arches giving access to both parts. The lighting is fairly dim, with less natural light than might be expected given the size of the windows.

A half-flight of stairs sweeps up to the bar and another couple of seating areas, and there's a partially-covered beer garden at back. The extensive beer garden, with its many plants and good views from its upper level, is popular in warm weather.

Kake first visited on a Friday lunchtime in October 2011. All three handpumps were on, offering Edge IPA, Wyre Piddle "Piddle Potter's Chamber of Secrets" (described by the member of staff behind the bar as "a comedy ale"), and Bridge House ale (£1.90/half), the latter being brewed by Tetley, perhaps a rebadging of something else. On a second visit on a Monday afternoon in May 2019, one handpump was clipped for Bridge House English Pale Ale and the other had a Tribute clip turned round. A pint of lime and soda was £2.25.

There were a fair few people in on both our visits, though most of them were in the beer garden and there was plenty of space to sit inside. Clubby music was playing, not too loud.

In October 2011, Kake tried the paté with cranberry chutney and granary toast (£5.25) photo. The advertised granary toast was not in evidence, being substituted without warning by slices of a ciabatta-like white loaf. The paté was pretty good, though, with a chunky texture, and the accompanying rocket salad had a decent balsamic reduction drizzled on top. It was plenty for a light lunch.

In May 2019, Kake's breaded garlic mushrooms (£6) photo were a decent example of the genre. Very little garlic flavour was evident, but the breading was nicely robust without being too thick. The aioli was fine, with a welcome tang of vinegar.

On the very hot Sunday of 2019's August Bank Holiday weekend, Rowley Birkin QC had the fish & chips (£12) and a pint of the Bridge House's Pale Ale (£4.90). Both were fine, though the experience was marred by persistent divebombing by flies. The meal was taken on the (still very attractive) upper deck of the beer garden, so the divebombing was not that unexpected.

Child-friendliness: According to a sign seen in May 2019, children are welcome until 8pm. There's a pull-down nappy change in the lower-level toilet, though see below re code lock.

Accessibility: There's an astroturfed ramp to get in, and some seating and a toilet on the same level, but there are several steps to get to the bar (with a sturdy handrail on both sides). Moreover, although the lower-level toilet door was left open on our visit, it has a code lock and a notice stating that the code must be obtained from the bar staff.