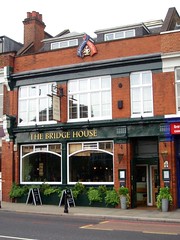 The Bridge House was an Adnams pub near Tower Bridge. According to the Aug/Sep 2018 London Drinker, Adnams have surrendered the lease and the pub is now closed.

The decor is modern rather than traditional, with a dark leather banquette running along one wall and the obligatory church pew at the back. Most of the tables are fairly small, with only one largeish round table catering for bigger groups. On our August 2010 visit, the tables alongside the banquette were all pre-laid with cutlery, though there seemed to be no problem with people sitting there just for a drink.

Although this is definitely a pub, where you go up to the bar to order drinks and you can come in for a drink without dining, there was a little weirdness on one lunchtime visit when the staff seemed to assume we were in for lunch, and asked us a number of questions when we arrived instead of just letting us sit down and send someone to the bar. If this happens to you, don't be put off! Just tell them you're in for drinks and they'll leave you in peace.

As of August 2010, food is served noon-4pm and 5:30pm-10:30pm Monday to Sunday. Various combinations of Kake, bob, Martin, DrHyde, Nick, etc have eaten here several times now. The food is of the gastropub variety, and is very good. They also stock various bar snacks including rice crackers (£2.50/dish as of August 2010).

In October 2007 we tried the homemade hummous (very garlicky — a good thing!), the grilled kidneys with black pudding and bacon, the fillet steak (about £16; cooked properly, with a very good peppercorn sauce on the side, though there may have been a bit too much connective tissue for bob's liking), and the bread and butter pudding (very good in bob's opinion, and the custard was top notch). In October 2008, Kake's ribeye steak (£15.75) was again good; cooked as requested (rare), a very generous size, and accompanied by some tasty "fat chips". The price of the steak had risen to £16 photo by the time of secretlondon's visit in December 2008, with peppercorn sauce being an extra £2.

There's a large function room upstairs which will hold around 80 people and is free to book if you have more than about 25 in your party; they'll staff the bar up there for you too. (They also used to have a small function room in the basement, but according to London SE1 as of mid-2013 this is no longer available.)

We've never seen it be unpleasantly crowded here. On a Saturday evening visit in September 2008 it was busy but not rammed; Kake and bob managed to get a sofa. On a Friday evening visit in August 2010 it was quite busy around 7pm-8pm, with loud music playing and the lights turned down low, but an hour later it was quieter, the music had been turned down (and later off), and the lighting was adequate again. They seem to do a lot of their trade at lunchtimes.