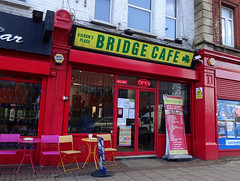 They have booth seating with long benches, which can probably seat about 20 people in total. They also have a couple of tables outside. Order and pay at the counter, then find a seat and your food will be brought to you.

Bob visited on a Friday lunchtime in June 2008 and had a Full Monty breakfast at £5 photo. The white pudding was interesting and not something you see that often (the Irish influence visible on the outside suggests why it is included). The black pudding was really quite fresh and tasty and quite different from the black puddings you normally get. The bubble also was quite good: it actually had discernible pieces of cabbage and onion.

Kake visited on a Saturday afternoon in October 2008 and also had the Full Monty. The bubble and the black and white puddings were as bob describes them. The toast was pretty good, made with bloomer rather than normal white sliced. Fried egg had a runny yolk as is right and proper. The mushrooms and bacon were a bit hard though. Tea was made fresh with a teabag rather than from an urn.