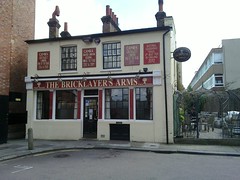 They have ten handpulls on the bar, and serve the full range of Timothy Taylor beers.

In the past we've found the Tim Taylor Dark Mild very drinkable, and on a March 2009 visit, the Ram Tam was particularly nice. One notable guest on our January 2008 visit was Downton Chocolate Orange stout — very tasty. There is normally one real cider available on a hand pump. As of March 2009, the real ales are £3/pint.

They really care about their beer here. On our January 2008 visit, the barman poured an entire pint down the sink because he thought it looked a bit cloudy.

As of June 2013 they don't do any food, though at beer festivals they normally have some Cornish pasties.

The decor is quite basic and functional, but in a good way. There's a large table at the front which is good for bigger groups. They have a proper open fire, and a bar skittles set. There is a largish paved beer garden at the side of the pub photo.

The men's toilets are very small.