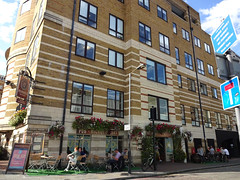 Pub with microbrewery near Angel Station.

It's part of a small chain, with about 15 branches scattered around South-East England. The decor is an odd combination of faux-industrial and faux-rustic, with exposed pipes and ducting on the ceiling above a scratched wooden floor with raw planking dividers. Much of the seating is at high tables, though there's normal-height seating too. More seating is provided outside, in a narrow space along the front of the pub.

Kake and friend visited on a Thursday afternoon in September 2016. There were about a dozen other customers inside at 4pm, and several more sitting outside. Music was playing, not too loud.

There were five real ales on, all brewed on the premises: Disraeli, Arc Angel, Spandau B, Myddleton, and Watchmaker. Two others were marked as "coming soon". They also had one real cider: Orchard Pig Ginger & Chilli.

According to a sign in the entryway in September 2016, food is served 7:30am-10pm Mon-Fri, noon-10pm Sat, and noon-9pm Sun. The menu is fairly standard Americanised pub food. We tried the garlic flatbread (£4) photo, which came with a small bowl of olives and some balsamic vinegar and olive oil for dipping. It was fine; competently prepared, and a generous portion.

They have free WiFi, which a sign on the wall on our September 2016 visit claimed was passworded; it actually turned out to be one of those where you have to fill in a form and give an email address, but there's no checking of whether you give them your real address.

Accessibility: No steps to get in, and step-free to bar, some of the seating, and the toilets including a RADAR-locked accessible one with nappy change facilities.