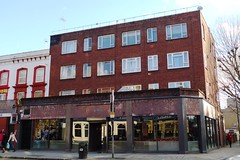 A BrewDog bar in Shepherd's Bush.

The interior has an industrial look and feel. The seating is a mixture of banquettes, stools and high tables, and normal chairs and tables. Towards the back there are two pinball machines including an AC-DC one photo, as well as three arcade machines including Space Invaders and the Star Wars Trilogy. The bar has 30+ keg taps serving a large range of beers from BrewDog and other breweries.

bob, Billy, Ilmari and friends visited on a Wednesday evening in May 2014. When bob arrived at 6:30pm there were several tables free, and throughout the night there was nearly always some spare seating.

Most of the beers available were quite strong, with only about three being below 5%. The prices were about £5 for the measure they would serve it in. As the beers got stronger, the measure got smaller, so beers of 10% or over were served as thirds while beers around 6% were served as two-thirds.

The beers we had were fine, if not entirely all to our tastes. bob asked for a half of the BrewDog cherry sour and was offered a taste first because lots of people supposedly find it odd. (I declined, and to my taste it wasn't actually sour enough.)

Food is Texan BBQ. Ilmari and bob shared a sampler platter (£23) photo and some fries (£4) with extra brisket chilli (£2) photo. The fries and extra chilli were very good, although the chilli could have been hotter. The brisket and sausage on the platter were pretty good, but the rib and pork shoulder were a touch too dry and the coleslaw didn't really have much flavour to it. The beans were quite nice.

Accessibility: RADAR-locked accessible toilet on the same level as the bar. Other toilets down a flight of stairs in the basement. Not sure about steps to get in.