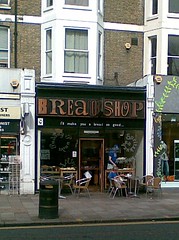 Bakery in Chiswick, part of a small chain which also has branches in [Brent Cross Shopping Centre]? and St John's Wood, and which supplies Selfridges Food Hall and [Harrods]?. Interesting breads (including sourdough) plus pastries.

Bob visited for a breakfast croissant and cherry Danish in March 2008. The croissant was a bit soft, but the Danish was quite good (and also quite large). Pastries are around £1.60-ish, and some of them (e.g. croissant, apple Danish) come in spelt varieties as well as wheat.

They also sell coffee and soft drinks to take away. Although they do have some outside seating in good weather, their focus is on takeaway.