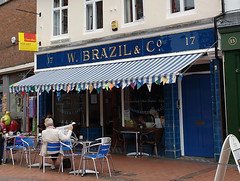 Brazil's Cafe was a cafe in Chesham. It has now closed and been replaced by an evening-only restaurant called Brazil's Kitchen.

Its unusual name is due to the old butcher's sign on the frontage, which is included in the building's Grade II listing.

It's quite small, with seating for maybe about 25 people inside, though there's room for another 20 or so out the front in good weather. Most of this is at wooden tables for four, but there are also some comfortable half-round armchairs near the front window. The paintwork and wallpaper are in muted browns and creams, complementing the wooden chairs and tables and the exposed floorboards. Old photos, maps, and drawings of the local area hang on the walls.

Sandwiches are made to order, and they also do a good range of breakfasts.

Kake visited on a Wednesday lunchtime in September 2015. There were half a dozen other customers in when I arrived around noon, and a couple more outside. Relaxing music was playing, not too loud.

The accompanying salad was dressed with balsamic vinegar and a decent enough olive oil, though I'd have preferred a proper vinaigrette, as the leaves at the bottom ended up rather greasy. The other components were good, though — interesting leaves, flavourful baby tomatoes, fresh cucumber, and thinly-sliced red onion.

Service was friendly and efficient, with staff cleaning tables swiftly after the departure of previous occupants. No service charge was added to the bill.

Kake's verdict: A nice place to linger over a pot of tea. I'd like to come back and try their breakfasts too, as the poached eggs on the table next to me looked very good.

Child-friendliness: They have at least one highchair (low back, no tray). There were a baby and a child of about 2 present during our visit.

Accessibility: No steps to get in. One step to the toilet (a single unisex cubicle).