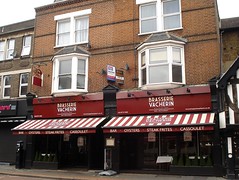 Brasserie Vacherin was a French restaurant in Croydon. It closed down in early 2019, initially claiming that this was "for a few weeks for refurbishment", but no refurbishment work actually took place and by August 2019 all signage had been removed photo.

Note: According to the Brasserie Vacherin website as of April 2019, the restaurant is "closed for a few weeks for refurbishment", while local group Croydon Eats Out reports that people with reservations were not informed of the closure. It's unclear when or whether it will reopen.

It's housed in a double unit, entered via the bar area on the left. To the right and at the back are dining spaces, with wood-panelled walls, exposed brickwork, and arty seafood prints interspersed with vintage advertising posters photo.

Kake and bob visited for breakfast on a Sunday morning in October 2017. We'd booked, but this proved unnecessary as we were the sole customers when we arrived at 10:30am and only two others turned up while we were there. Jazz was playing, not too loud.

There was some confusion over which menus they were actually serving, but we eventually managed to order from the breakfast photo and brunch photo menus.

Kake went for the spinach and crab eggs benedict (£8.50) photo. This was a bit oddly-executed; the muffin hadn't been toasted, so it got very soggy from the spinach, and the hollandaise was thick, semi-broken, and browned on top. There were also just a few too many pieces of shell in the crab. However, the spinach was cooked accurately, and the eggs were just right, with runny yolks but properly-set whites.

bob had the two-course brunch (£13), starting with deep-fried squid and roast garlic aioli photo. The squid was just a touch greasy, but the batter was well-seasoned and crispy, and the aioli well-flavoured. A main of fried eggs with chorizo, avocado, bacon, and frites photo was fine aside from the avocado being fridge-cold while everything else was warm.

The bottomless virgin mary included with bob's brunch deal was good, with enough tabasco even for bob. Kake's tea was terrible, though, made with a teabag so cheap that it left tea dust in the bottom of the cup; it was also brewed strong rather than weak as requested.

Service was very slow and not particularly well-timed; there were long waits for everything, and Kake's main was eaten long before bob's even arrived. We had to ask twice for tap water, and when it did turn up it tasted so strongly chlorinated it was almost undrinkable. A 12.5% service charge was automatically added to the bill.

Kake's verdict: I was really disappointed! I'm hoping this was just an off day, since others have reported much better experiences.

Accessibility: A tiny step and then a ramp to get in. There is an accessible toilet, but like the other toilets it's located up one step and then down another. On our October 2017 visit the path to the toilets was made very narrow by a propped-open door in the way.