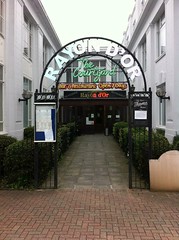 Rayon D'Or was a bar and restaurant on the Purley Way in Croydon. It has now closed. According to Google Street View, by June 2016 the premises were occupied by an Indian restaurant called Imperial.

Bar/restaurant on the Purley Way in Croydon. It's located in Airport House, which used to be the terminal building for Croydon Airport and is now mostly offices.

bob visited on a Sunday lunchtime in September 2013. There were plenty of other customers, but this might have been because the Croydon Airport visitor centre was open for Open House London. It might also see some trade during weekdays, as it seems to be set up to do sandwiches and teas and things for the office workers of Airport House. They also do breakfast photo of breakfast deals menu.

There's an area set out for dining, and another area that's more pub-like. I sat in the pub-like bit. There was table service for food and drinks. It seemed to be OK to come in just for a drink.

I had the roast beef carvery (£8) photo, which is possibly only served on Sundays. There was also gammon and turkey available. It included one slice of beef, which was pink in the middle; not as rare as I'd have liked, but certainly not overcooked either photo. The vegetables were pretty good. Horseradish and mustard were provided without me having to ask.

I had a pint of keg Courage Best (£3.50) photo. They also had draught Guinness. No service charge was added to the bill photo.

Accessibility: Can't remember if there were steps to get in. The toilets are on the same level as everything else, and there may also be an accessible toilet.