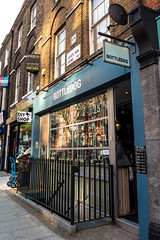 BottleDog was a specialist beer store in Clerkenwell, owned by Scottish brewer BrewDog. It closed down in January 2017.

Specialist beer store in Clerkenwell, owned by Scottish brewer BrewDog. As well as lots of bottled beer it sells home brewing supplies and four rotating kegs of beer by the growler.

secretlondon visited one Friday night in March 2016. I'd read on BrewDog's own website that it was on Gray's Inn Road near King's Cross, but it's actually at the other end in Clerkenwell! It's probably nearer Chancery Lane station or Russell Square.

It's a small shop full of beer bottles, with a wall of fridges on one side. As well as selling everything by BrewDog (as you'd expect) they have a wide range of craft beer from the UK and elsewhere. When I visited the four beers on keg included ones by BrewDog, Pressure Drop and Kernel. The staff were helpful and knowledgeable.