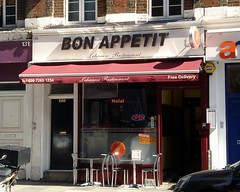 Lebanese restaurant in Whitechapel. They also do takeaway and delivery, and you can order online via Just Eat.

Kake and bob tried the delivery option on a Friday night in June 2009. Delivery was just about on time.

Mixed shawarma (mixed sliced grilled meats served with bread and salad, £7.50) was slightly dry but was fine once mixed with sauces. Soujok (small spicy sausages, £4) lacked both spice and flavour. Batata harra (sauteed potatoes, £3.50) were also lacking in spice, and a bit soggy for a fried potato dish. Falafel (£3.50) were OK. Tabbouleh (£3.75) was fine, with a high proportion of green herbs. Baba ghanouj (smoked aubergine puree, £3.75) was certainly smoky, but there were quite a lot of aubergine seeds in it. Hoummos (£3.50) was quite smooth, but the flavour suggested that bottled lemon juice was used instead of fresh.

We were sent three pieces of bread to go with all this; we'd have liked to have the option to order more (and indeed more indication of whether the dishes came with it at all). The chilli sauce had an interesting peppery note, and the garlic mayo was very garlicky.