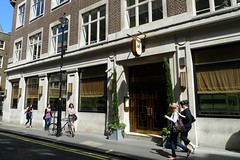 A style bar and diner in Soho.

The overriding impression of this already fêted bar and restaurant is its stylish decor. There are upstairs and downstairs dining and drinking areas, which remain popular throughout the day.

On a visit by Ewan and others in September 2009, we arrived after midnight to try the cocktails, and were conducted from a reception area by the front door down to a long, dark bar with fairly private little booths for four people each, which fit our group perfectly. It was empty downstairs when we got there, though a couple of other people drifted in and out before we left around 1:30am (at which point they closed up for the evening).

The bar menu features an extensive range of wines, champagnes, spirits and cocktails. Their 'BBR Signature' cocktail is a rhubarb gin & tonic (£7.50) which was really rather lush and well worth sampling. We also tried an English 75 (a tasty variant of the French 75) with earl grey syrup, Hendrick's gin and sparkling wine.

The bar menu offers a small selection of food and nibbles to go along with the drinks, including a plate of cut sandwiches (£6.50) photo which are fine if slightly small, and a selection of really very tasty cakes and desserts (£9.50) photo, which satisfied our small group.