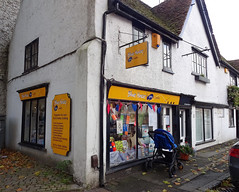 Rather than focusing on any one craft, it has a few bits of everything: yarns, embroidery silks, haberdashery, beads, paints, and papercraft supplies including stamps, stickers, and quilling equipment.

The yarn selection is limited, but the embroidery section is much more extensive. Haberdashery supplies are pre-packaged rather than offering e.g. elastic or ribbon cut to order, but cover a reasonable range. They sell a fair few pre-made components such as sew-on embroidered patches, papier mache figures ready to paint, and ready-quilled figures.

When Kake visited in October 2017, the member of staff on duty was friendly, welcoming, and helpful without putting any pressure to buy. They even managed to partially solve a sourcing problem I've been working on for at least a decade!

Accessibility: A step to get in. Like many such shops, it's small and fairly crowded with stock.