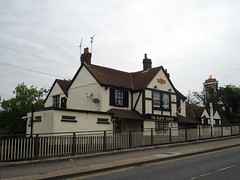 Although technically situated in the middle of an industrial estate, it's also on the edge of the Grand Union Canal, with balcony decking and a beer garden photo overlooking the canal and a gate leading directly onto the towpath. Inside, it's quite smartly decorated photo, with seating on multiple levels.

Kake visited on a Tuesday lunchtime in July 2013. Music was playing, not too loud. There were a few other customers in, some of them watching the tennis on a large projection screen. Three Fuller's ales were on offer, including the seasonal Sticky Wicket (£1.75/half).

According to the Black Horse website, as of July 2013 food is served noon-9pm Mon-Sat and noon-8pm Sun; see photo of main menu, photo of specials board. From the specials board, Kake's pork and red pepper burger (£7.50 including chips) photo was a bit disappointing; the burger was small, unremarkable, and a bit gristly, and the advertised red pepper was undetectable. The chips were skin-on, which I approve of, but were mushy, floury, and bland. I did like the gherkin slices in the burger though, and the burger bun was structurally sound.

Quiz night is Thursday, according to the 2010 Good Beer Guide (and the Fuller's website as of September 2009).

Accessibility: No steps to get in from the road side. The bar, toilets, and some of the seating are all on the level. Many steps to get to the beer garden from inside the pub, though there may be level access round the side; we're not sure.