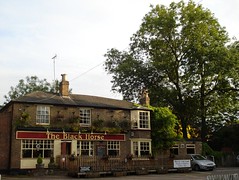 Inside, the decor is almost reminiscent of the nice kind of hotel bar. There's a patterned carpet on the floor and a couple of leather sofas at one end. A pool table is at the other end, in its own alcove.

Kake visited on a Wednesday evening in September 2009. Beers available were Brakspear Oxford Gold (£1.45/half), London Pride, and Young's Bitter. A board on the wall advertised Morlands Original Bitter as "coming soon".

On arrival, it was a little disconcerting to see all the other customers lined up against the bar staring in my general direction — until I realised that there's a flatscreen located just above the entrance, and I'd arrived right in the middle of an England football game. Although I was pretty much the only person in the pub who wasn't watching the game, it wasn't disruptive; there were seats available to the side (I even got a sofa), and the cheering and applause when a goal was scored were more polite than rowdy. A couple of (well-behaved) dogs were wandering around, so the pub appears to be dog-friendly.

Food is served noon-3pm Mon-Sat, according to a sign seen outside in September 2009.

Accessibility: A ramp up with a bend in the middle, to get in. Might not be wide enough for e.g. a mobility scooter, not sure. It's step-free to the bar, seating area, and toilets once you're in. The pub has its own carpark.