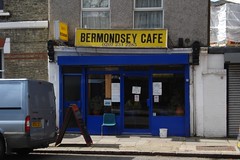 Used to be a proper greasy-spoon cafe in Bermondsey, opposite [Southwark Park]?; but some time around late 2008/early 2009 it closed and turned into a fish and chip shop called first Dilen's photo of flyer and then Royal Fish & Chips photo of flyer/menu.

They do fry-ups, chips, and proper meals (e.g. roast chicken and veg). The fry-ups are good and reasonably priced (chips, beans, and orange juice is £2.30; hash browns are 90p; beans, hash browns, mushrooms, black pudding, two toast, and tea came to £4.30 in Feb 2008; set breakfasts are cheaper). Proper builder's tea from a very large pot, topped up to drinkable concentration with hot water. Couple of newspapers usually available for perusal, and lots of regular locals (especially on a weekday morning). Seating for about 25 people. The local variant of cafe etiquette is that you order and pay then find a seat.

The chips & beans are vegan; the mushrooms unfortunately aren't as they're cooked on the same griddle as the bacon etc (which Juliet discovered by getting a bit of bacon in her mushrooms...) Unsurprisingly they don't have soya milk, but they'll do black tea/coffee (you have to specify, it comes milky by default!)

Be warned - sometimes they close up a few min early on weekends if there's no custom, and they're never open on Bank Holiday Mondays.