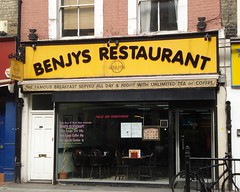 Benjys was a greasy spoon in Earl's Court; it has now closed. As of August 2011 there's a "to let" sign up.

Does a decent enough breakfast. The Builder at £4.10 (as of August 2008) consists of egg, a single strip of bacon, two sausages, beans, tomato, chips, toast and unlimited tea photo. The standard is pretty good too, though they don't do black pudding.

The other dishes are quite reasonable. They are licensed to serve alcohol. Wine with a breakfast is fun.